As of March 20th 2022, the U.S. Forest Service has closed the public comment period on the Draft Environmental Assessment for the proposed 5,200-acre Grasshopper Timber Sale in Mt. Hood National Forest. The forests that would be affected by this project are bordered to the west by Boulder Lake and to the north by Badger Creek Wilderness.

The Grasshopper Preliminary Assessment (PA) was released in late February or early March of 2022, with a 30-day public comment period. The Barlow Ranger District on Mt. Hood National Forest first placed this project on “hold” in 2020, while the agency shifted to addressing the impacts of the 2020 Labor Day fires. Before this change in project timeline, the Forest Service dropped several units within Late Successional Reserves, which were in close proximity to northern spotted owl nests, and were found by Bark groundtruthers to contain suitable owl habitat.

The agency also dropped several units proposed on road 4860, which were within the Mt. Hood National Recreation Area, and would have impacted high-elevation old growth forest. Along with these positive changes, the Forest Service also introduced an action alternative which would add 284 acres of shelterwood logging (~15% tree retention) in stands east of the 4860 road. Bark continues to be engaged with the Wasco County Forest Collaborative Group, who will be providing recommendations for this project once it is being actively planned again.

The project area spans several forest types from high elevation, moist, mixed conifer to low elevation pine and oak forest, beginning east of Boulder Lake, bordered by the Badger Creek Wilderness to the north and by the Rocky Timber Sale to the south, ending near the Bonney Crossing campground. The US Forest Service states their objectives are to: “enhance and restore forest diversity, structure, and species composition including pine/oak habitat and riparian reserves; maintain a road network that provides for public and firefighter safety; enhance restore and protect wildlife habitat; and provide forest products in alignment with the Forest and Northwest Forest Plans.”  While this may sound innocuous, an area of 5,658 acres has been proposed to receive “treatment” (also known as logging). With this project, they plan to produce 15-20 MMBF (unit: one million board feet) of timber.

The project area contains designated Critical Habitat for northern spotted owls, a National Recreation Area (around the popular Boulder Lake), and Late Successional Reserves (meant for conservation of old-growth dependent species). The 2019 Scoping document suggests that “past management activities have created highly dense, closed-canopy conditions… contributed to the mortality of trees…[and] slowed the development of new age classes and structural variety that would have occurred with natural disturbance in the past” however almost 70% of the planning area includes Riparian Reserves, unroaded, previously unlogged or designated wildlife habitat, while less than a third of the area is described as previously or recently logged. Bark has been surveying the area since August 2019 to document conditions on the ground to compare to the Forest Service’s descriptions.

The Forest Service stated in its 2019 Scoping notice that past management resulted in conditions where “densely stocked stands are creating continuous ladder fuels” and that the “majority of proposed areas for treatment in the Grasshopper planning area… have missed one or more natural fire events and now contain unnaturally high fuel situations”. While the Forest Service acknowledges that prescribed fire creates conditions that allow fire to perform its natural ecological function, the agency proposes prescribed burning only as a follow up activity after logging and “fuels reduction” activities such as increasing the spacing of the tree canopy.

Threemile and Boulder Creeks are the primary subwatersheds & the entire planning area lies with the White River Watershed.

The U.S. Forest Service’s stated Purpose & Need for this project: “The goal of the Grasshopper Project is to implement vegetation treatments through a variety of methods across approximately 7,660 acres of the Mt. Hood National Forest, restoring the landscape to conditions more consistent with natural disturbance regimes and species compositions.  Treatment types could be, but would not be limited to, sapling thinning; commercial plantation thinning; variable density thinning from above and below; and shelterwood cutting.  Treatment would occur across a variety of stand types and stand ages to meet stated objectives.”

The Grasshopper area includes significant acres of Critical Habitat for the northern spotted owl, and at least three owl nests have been previously located. The pileated woodpecker and pine marten are two management indicator species under the Mt. Hood Forest Plan.  The Grasshopper timber sale includes 541 acres of their important habitat.

Bark believes the agency should evaluate the current roads system and impacts to assess future needs for access in this project area, while actively looking at how to reduce the oversized road network forest-wide.

We are concerned that the Grasshopper project currently includes 213 acres within what the Mt. Hood Forest Plan designated as “Unroaded Areas”, in addition to 272 acres of logging within a National Inventoried Roadless Area. Both land use allocations were designed to retain their roadless condition, and should not be entered for logging using “temporary” road-building as part of this project.

A Fresh Start to the Year and Programming at Bark

A Bark Alert with exciting updates to programming and leadership strategies for the year ahead. 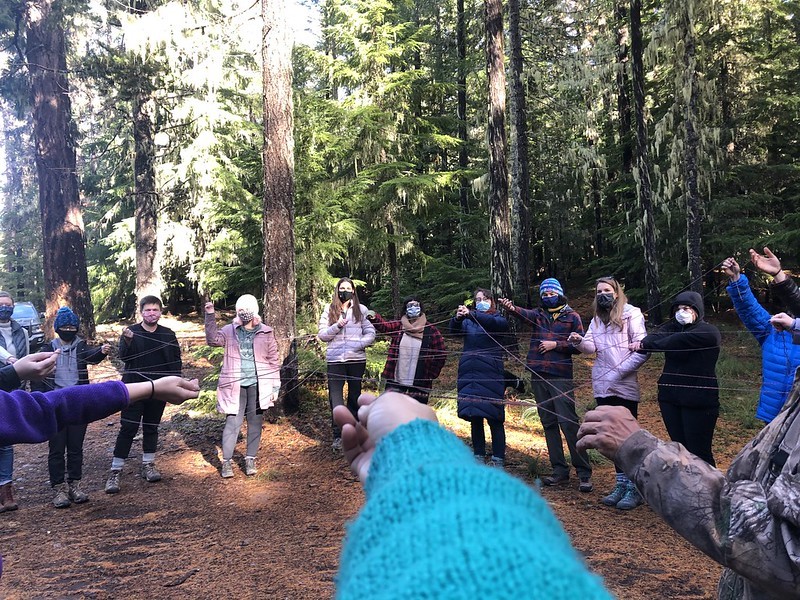 Bark is bold because of you!

Here at Bark, we proudly invite you to celebrate another year of dedicated, innovative, and tenacious community advocacy for the forest, waters, wildlife, and communities striving and thriving across the landscape commonly known as “Mt. Hood National Forest”. Bark works hard and embraces risk in our effort to be a different kind of environmental organization, and I hope you will show your support as we near the deadline for our Winter Campaign. We are so grateful for the communal generosity that empowers us to explore and transform as well as defend and restore!

There is so much to love about Bark and Mt. Hood National Forest. As a volunteer, long-time donor, and current member of the board of…

Our forest. Our future.

Bark’s mission to transform Mt. Hood National Forest into a place where natural processes prevail, where wildlife thrives and where local communities have a social, cultural, and economic investment in its restoration and preservation.