The Forest Service followed Bark’s recommendation to exclude any logging along roads that are known to be low use, or planned to be closed in the future, and are keeping these closed until further analysis. The agency also followed Bark’s recommendation to commit to performing a full analysis on the current National Forest road system, after last year’s and this year’s fire, to audit which roads are needed, or not needed, in the future before they cut any more trees. The agency also followed Bark’s recommendation to limit tree cutting to immediately adjacent to the road (one tree-height away), until they can complete further analysis. The official reason the agency had listed for cutting down living trees in a sensitive, post-fire area was listed as “public safety”; however, Bark’s analysis showed that many of the proposed areas were not in use and/or had no public access.

The Oregon Department of Transportation (ODOT), Bureau of Land Management, and Mt. Hood National Forest have been planning and performing “hazard tree” removal since the 2020 Labor Day fires. Accounts of overcutting, unsupported or hurried decisions, fraudulent activities, and a general lack of public transparency were reported extensively in the media. Bark’s helicopter flyover of the Clackamas Highway 224 was included in OPB’s initial reporting on ODOT’s actions.

Bark acknowledges that ODOT and the Forest Service (USFS) are making difficult decisions very quickly about cutting trees along roads and river corridors that are highly valued by Oregonians. The opportunity for public input for this activity has been minimal to none and there is currently no public access to these areas.

One of the reasons that the USFS can move so fast to complete roadside logging is because of its categorization as “road maintenance”. However, they are planning to offer the work to commercial timber companies, meaning that any logging will be for-profit going to private companies. Bark believes that this is not consistent with their definition of road maintenance and requires greater public scrutiny.

There are many roads in the forest that do not need to stay open (or even reopen right away) which recently has been acknowledged by the USFS. However, the agency initially declared that if the roads were open before the fire, they would reopen them by removing any danger trees along them. Bark believes this to be a waste of public funds during a time when the watershed desperately needs support of more effective methods of fire recovery.

For ecological and social reasons, tree abatement within the Clackamas River Ranger District should be as low impact as is reasonably possible. The best way to accomplish this is to make sure only truly appropriate trees are removed. If the Clackamas Fires Roadside Tree Abatement Project is slowly implemented over several years instead of over the next year or two, a more careful assessment of trees’ likelihood to cause a safety risk will allow for accurate retention of live may be possible. A slower and more reasoned approach to tree abatement activities will allow concerns of stakeholders and the public to be addressed effectively, rather than overlooked in the interest of moving the project forward quickly.

We hope that these agencies will focus tree removal on imminent danger or hazard trees located within striking distance of high- use areas, such as developed sites, parking lots, and paved roads. We urge them to prohibit cutting live, green trees, since all surviving trees are helping to rebuild the above and below-ground ecosystem.

While the Mt. Hood National Forest released their proposal to cut trees along up to 200 miles of forest roads in the areas of the Riverside, Lionshead and White River fires, ODOT came under fire in the local media for controversial accusations brought against their handling of roadside tree cutting along Oregon waterways.

During a April 28th Senate Committee on Wildfire Hearing, former workers with the Florida-based emergency management corporation CDR Maguire testified that the agency has been actively overcutting along roads across Oregon’s landscape. These whistleblowers testified that unqualified workers are actively marking trees for removal using an unscientific and constantly evolving definition of what constitutes a hazard tree. ODOT subcontractors have hastily and sometimes indiscriminately removed healthy and living trees, even in old-growth forests, recreation areas and along important rivers and streams, in actions that have been said by whistleblowers could amount to fraud. During the Senate hearing Ron Carmickle, mayor of Gates, told lawmakers: “We have a major problem going on here in Oregon. I believe our beautiful state is being rampaged. I believe money that should be used to rebuild our state is being pilfered by contractors and corporations set to profit from our devastation.”

ODOT’s official statement on a tour of Highway 224 (at which Bark was present) was that they had tens of thousands of trees yet to cut within the Clackamas River canyon.

Watch helicopter footage of the project area from Bark’s flyover with Green Oregon.

ODOT’s definition of a “hazard tree” is one that has a 50% chance of dying within three years. This means of the approximately 63,000 additional trees slated for logging at the time of Bark’s Highway 224 tour (many of which were too far upslope for us to see), over 31,000 might not even have died from fire. And of the trees that do die, an even smaller percentage would pose any public safety hazard. 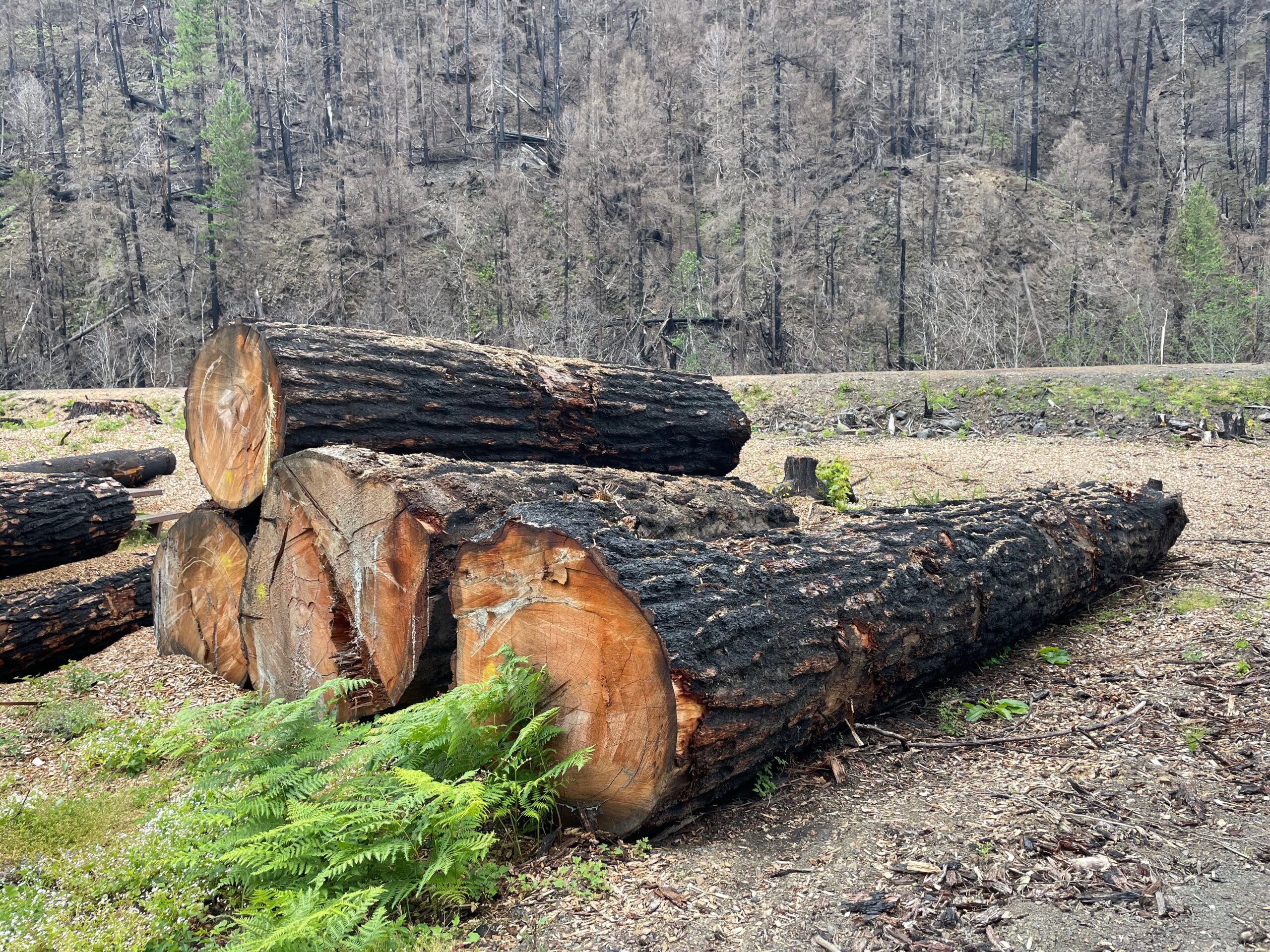 Purpose, Need + Proposed Action as stated by the Forest Service:  The USFS and ODOT are proposing and carrying out tree removal activities with the stated reason that they cannot reopen the forest until trees that could potentially cause a safety hazard are removed.

Several resources, including agency planning documents, are included below.